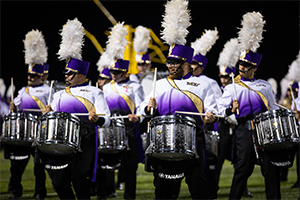 The band has been invited to perform at this Sunday’s Philadelphia Eagles NFC Wildcard Playoff Game at Lincoln Financial Field in Philadelphia.

The band will practice ahead of the game at South Philadelphia’s NovaCare Complex until just before game kickoff at 4:40 p.m. Other ways to involve the band in the day's festivities are still under discussion.

In September, the marching band was awarded the prestigious Sudler Trophy by the John Philip Sousa Foundation. Known as the “Heisman Trophy of the collegiate band world,” the award recognizes bands demonstrating the highest musical standards and innovative marching routines, as well as for important contributions to the advancement of marching band performance standards over a period of years. In November, the band marched in the 100th Annual 6abc Thanksgiving Day Parade.

The Golden Rams Marching Band performs regularly at WCU football games, numerous exhibition events throughout the region and at special events for the university and community.  The band has performed at Pittsburgh Steelers, Philadelphia Eagles, New York Jets, New York Giants and Washington Redskins football games. The group has been featured during Philadelphia Phillies World Series appearances, marched in New York’s Macy’s Thanksgiving Day Parade and the Philadelphia Thanksgiving Day Parade. The Golden Rams have performed in exhibition at the 2013 Atlanta Regional, the 2012 Pittsburgh Regional, and at the Bands of America Grand National Championships in both 2009 and 2018.