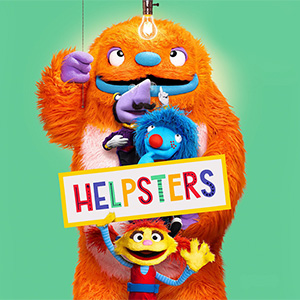 West Chester University Professor of Graphic and Interactive Design, Jeremy Holmes, is stepping into the spotlight with two furry new friends that are his own creations.

Holmes is the creator of Mr. Primm and Scatter, two of the four starring puppets of the brand new Helpsters, a TV show developed by Sesame Workshop that launched on Apple TV Plus on November 1. Helpsters follows a team of vibrant “monsters” who love to solve problems and learn to figure things out through planning.

Holmes admits it was the “classic right place and time connection,” that got him the gig.

Holmes says, “It was a very quick turnaround. A colleague of mine founded Monkey Boy Productions in Glenside, PA. They specialize in puppet design for Broadway and television, among other things, and for years we have been talking about collaborating. He got a call on a Friday to submit some work for the show, but not the puppet designs. He asked if he could also submit designs for the puppets and then turned to me and mouthed ‘get to work’.”

Holmes worked through the weekend to develop his new characters, and it was his designs that won-out, a coup considering he is mostly known for his children’s literature illustrations.

Holmes attended a shoot of the show in September and met the show’s director and the actors voicing his puppets. The actor who voices his Mr. Primm character is Martin Robinson, also known for voicing Mr. Snuffleupagus from Sesame Street.

Holmes adds, “This whole experience has been surreal for me. It is so gratifying to be working with these giants in the industry. And it has been an amazing learning experience to see the characters I created come to life.”

From Abington, PA, Holmes is the illustrator of the successful children’s books Poem-Mobiles, Secrets of the Dragon Tomb, The Templeton Twins, The Emperor of Mars, The Eye That Never Sleeps and On the Day I Died. He has worked for Random House, NPR, The New York Times, Chronicle Books, Penguin and Abrams Books, among others. His work can be found at www.jeremyholmesstudio.com. Holmes has been an Associate Professor in West Chester University’s Department of Art + Design for five years.