Department of Theatre and Dance Presents Fefu and Her Friends
November 15 – 21, 2019 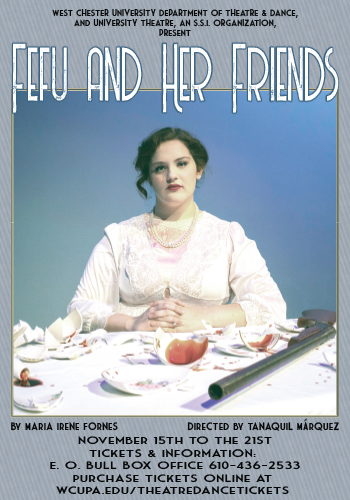 West Chester University’s Department of Theatre and Dance, in cooperation with the College of Arts and Humanities, is proud to present Fefu and Her Friends, by María Irene Fornés. The show runs November 15, 16, 19, 20, and 21 at 7:30 p.m., and Sunday, November 17 at 2 p.m., in the J.P.  Adler Studio Theatre, E.O. Bull Center for the Arts, 2 E. Rosedale Avenue, West Chester. Tickets are $12 and can be purchased at www.wcupatix.com.

The Department of Theatre and Dance at West Chester makes a commitment to produce at least one show each year that is written by a female playwright. Fefu and Her Friends was the fourteenth play by Cuban American playwright María Irene Fornés. Fefu is also under the direction of female guest artist Tanaquil Márquez, a rising star in the Philadelphia region who works regularly as an actor and director at some of Philadelphia’s top theatres.

Fefu and Her Friends is set in New England in the spring of 1935. The story spans the entire length of one day. The cast consists of Fefu and her seven female friends, who are gathered at Fefu's house to rehearse a presentation. The women interact with one another, and with their offstage male characters, and share their thoughts and feelings about life along with their personal struggles.

Márquez says, “When I was approached about directing this show, I read and re-read it. I was attracted to it for several reasons. First, it is non-linear - an absurdist piece, which I found so fascinating. Second, it is a ‘promenade play,’ meaning that it is very immersive, and the action moves to four different locations in the E.O. Bull Center. We will be asking the audience to travel with us from location to location. Finally, the show is such a workout for the eight women in the show. There is humor, but also a lot of pain and struggle. Helping these actors find that balance has been such a learning experience for all of us.”

The play is split into three parts. It begins in the living room of Fefu's country house. Part 2 is set in four different areas of the house: the lawn, the study, the bedroom, and the kitchen. The audience is divided into groups to rotate through each scene.

Tanaquil Márquez is the Associate Artistic Producing Director for Teatro del Sol, the only bilingual theatre company in Philadelphia, and is the 2019 resident theatre artist at coLAB Arts. As a Latina theater artist in Philadelphia, she centers her work on writing and directing bold, passionate plays in English and in Spanish. She is the writer and director of Azul, which premiered at The Drake in 2017 and later produced at Uptown Theatre in West Chester in 2018. Other directing credits include, Bodas de Sangre, I Only Came to use the Phone, and Spring Awakening. Tanaquil is a graduate from Case Western Reserve University with BA's in Theater and Spanish Literature as well as a student at the British American Drama Academy. This season, Tanaquil will be directing a staged reading of Yerma for Philadelphia Artists’ Collective and Oedipus el Rey for Teatro del Sol. She will also be starring in 1812 Productions This Is The Week That Is this holiday season.

A warning that loud noises and gun shots are heard during this show.

The Department of Theatre and Dance at West Chester University, an accredited institution of the National Association of Schools of Theatre, prepares students for the professional and the academic worlds of Theatre and Dance, while raising student awareness of civility, diversity, creativity, problem solving and social responsibility. The department offers a BA Theatre degree program with elective concentrations in Musical Theatre, Performance, and Design and Production, in addition to a dance minor and theatre minor.