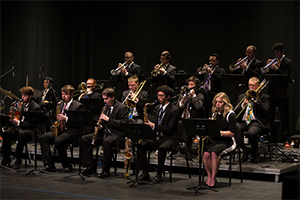 Students from West Chester U.’s Wells School of Music will be “jazzin’ it up” at Uptown Knauer Performing Arts Center on Friday, November 8, when the Criterions Jazz Ensemble performs a public concert. The concert at 226 N. High Street, West Chester, begins at 7:30 p.m. Tickets can be purchased for $15/$8 for students at www.uptownwestchester.org.

Marc Jacoby directs the esteemed and acclaimed ensemble, dedicated to classic, big-band and traditional and contemporary jazz songs. On the program are songs made famous by the Thad Jones/Mel Lewis big band, Count Basie’s Scott’s Place, and a song made famous by Norah Jones, sung by lead vocalist, Kate Lopez.

Jacoby says, “We wanted to give our students a performance experience outside of the University that allows them to perform at a professional level, as well as the invaluable experience of performing alongside world-class artists.”

Swana is an American jazz trumpeter who began his career in Philadelphia clubs. He has recorded 12 of his own albums, and another 14 as sideman. Stewart is a jazz saxophonist from Canada, now based in New York. He has released 16 recordings as leader.

The Criterions is the longest running University jazz band in the country. Originating in the 1920s, they were a student-led ballroom dance band, and provided entertainment for University dances, proms and post-Friday night games. As times changed, the “Crites” became a Faculty-led Jazz Ensemble by the early 1980’s, when the School of Music began Jazz curricula. They are known for their mastery of American popular songs and jazz standards from the early 20th century.