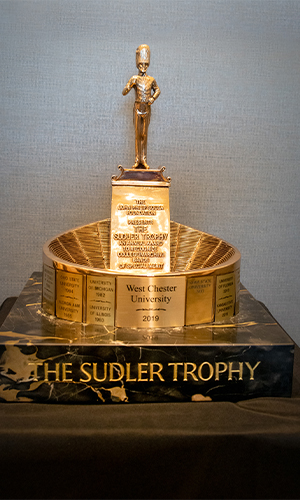 West Chester University’s “INCOMPARABLE” Golden Rams Marching Band became the first Division II school band to be presented with the prestigious Sudler Trophy by the John Philip Sousa Foundation. Representatives from the Foundation presented the coveted award to the band during halftime of the University’s home football game on Saturday, September 21,  in the John A. Farrell Stadium. Known as the “Heisman Trophy of the collegiate band world,” the award recognizes bands demonstrating the highest musical standards and innovative marching routines, as well as for important contributions to the advancement of marching band performance standards over a period of years.

As a recipient of the award, WCU’s “INCOMPARABLE” Golden Rams Marching Band joins the ranks of marching bands from top Division I schools including Ohio State University, Penn State University, University of Notre Dame and others. In all, 32 recipients have been honored with the Sudler Trophy since the award’s inception in 1982.

In addition to representatives from the Sousa Foundation, on-hand to accept the trophy were the band’s current 324 members, hundreds of alumni of the band, fans attending the game, and four generations of “INCOMPARABLE” Golden Rams Band Directors dating back to 1968:

The trophy, designed by distinguished artist Ed Blackwell, sits atop a marble base and consists of a bronze drum major astride a football stadium. It measures exactly 22½ inches from the base to the tip of the drum major's mace; precisely the size of a standard 8 to 5 step in marching. It will be on display in the Wells School of Music for the next two years.

John Villella, former band director current vice president for University Affairs and chief of staff says, “This is a significant award in the history of our beloved ‘INCOMPARABLE’ Golden Rams. Our band has thrilled fans with top-notch performances for well over 100 years and we are justifiably proud of our program and this legacy of excellence.”

The Golden Rams Marching Band performs regularly at WCU football games, numerous exhibition events throughout the region and at special events for the university and community.  The band has performed at Pittsburgh Steelers, Philadelphia Eagles, New York Jets, New York Giants and Washington Redskins football games. The group has been featured during Philadelphia Phillies World Series appearances, marched in New York’s Macy’s Thanksgiving Day Parade and the Philadelphia Thanksgiving Day Parade. The Golden Rams have performed in exhibition at the 2013 Atlanta Regional, the 2012 Pittsburgh Regional, and at the Bands of America Grand National Championships in both 2009 and 2018.