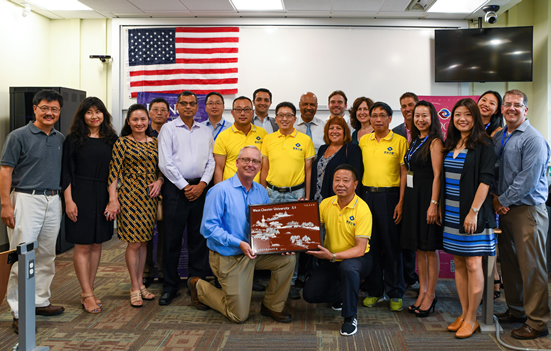 High school students from several schools in Yangzhou, Jiangsu Province, China, began a tour of the United States with a visit to West Chester University on July 9. Their trip was organized by DENO International Education Consultant LLC, a Philadelphia-area company that supports international students with their academic, extracurricular, and social lives in the U.S.

Nearly 60 students from 7th to 11th grade were accompanied by principals as well as teachers from each school.

Peter Loedel gave welcoming remarks on behalf of the University, pausing regularly for a translator to convey his greetings to the students and guests. A professor in the political science department and expert in European monetary politics as well as teaching/pedagogy in international relations, Loedel has just concluded his role as interim director of the WCU Center for International Programs (CIP). Other WCU representatives included Vishal Shah, associate dean, College of the Sciences and Mathematics and current associate vice president of the CIP; and Zhongping Huang, professor and founding director of the University’s new biomedical engineering program, which begins this fall.

Chester County Commissioner Terence Farrell, the guiding force behind the Chester County China Initiative (CCCI), also spoke, delivering his remarks first in Chinese and then in English. As a CCCI leader, Farrell has traveled to China as well as hosted Chinese business representatives here to promote business and cultural exchanges between Chester County and China. Members of the University community have joined Farrell on several trips to China to explore opportunities in educational and cultural projects.

Scott Nelson, U.S. Rep. Chrissy Houlahan’s community outreach and constituent advocate, was on hand to welcome the visitors on her behalf while she was in Washington, D.C. Also present was Stephanie Sun from the PA Governor’s Advisory Commission on Asian Pacific American Affairs to welcome the group on behalf of the governor.