WCU alumni young and old, once “the cream of the crop” of their class of musicians, will gather for the annual Criterions Jazz Ensemble Alumni Reunion Concert on Thursday, July 18 at 7:30 p.m. The concert is FREE and open to the public in the Emilie K. Asplundh Concert Hall, Philips Memorial Building, 700 S. High Street, West Chester.

For now 34 years, alumni of West Chester University’s premiere jazz ensemble, The Criterions, have reunited each summer to perform jazz, big band, and swing music under the direction of Lee Southall ’64, who was leader of “Crites” in his senior year and directs and plays trombone in the reunion group. Southall has organized the event nearly every year. 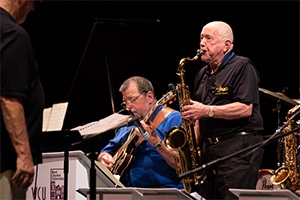 Southall says, “The WCU alumni who return to campus for this event are some of the best performers, music teachers, back-up and studio musicians around the region and beyond. We have outstanding talent all over. We seem to always gather about 40 – 50 of us and have a great time. The only requirement is that you had to be in The Criterions as an undergrad. We are looking for that kind of excellence.”

This year, Southall will be joined by a co-director, Dave DiValentino ’03, who directs the jazz band at North Penn High School and plays trumpet in various ensembles, including the Philly Pops Orchestra and the Philly Pops Big Band.

Southall says, “Dave is a top-notch musician and director and I think he’ll attract some of our more recent grads to this event when I one day hand over the reins to him. I’m thrilled to have him on board.”

Bob Curnow is another alumnus attending and playing in the reunion concert. Curnow is the owner of Sierra Music, a big band music publishing company. He donated his complete library to West Chester’s Wells School of Music. Some of his 2019 releases will be played at the alumni concert.

New Jersey native Henry Heyzer ’69 is celebrating his 50th reunion from West Chester University. Heyzer, a trombonist, performs and teaches, and has worked for the past 20 years with the Jazz Ensemble and Marching Band at Ridgewood High School.

“Attending the Crites reunion is how I’m celebrating my 50th. I can think of no better way. I’ve done a few of these before but haven’t been back now since 2013.”

He adds, “For me, the bond has always been with the music and the musicians. It’s always great to come back to play in Philips and to see old friends like Southall.”

The Criterions student band has been active on campus since the 1920s, when it was established as a dance band, making it the longest running university jazz band in the country. They are known for playing American popular songs and jazz standards from the early 20th century.

For the past five years, the concert has coincided with the WCU Summer Jazz Camp, a week-long camp program for Middle and High School students. The young campers will again open the concert with some music of their own.

Southall adds, “We all enjoy hearing the younger generation play. Our love of the music unites us all no matter our age, occupation, or what we have experienced in life.”

In all, it’s a two-day affair, with rehearsals scheduled on Wednesday and Thursday and a big barbeque bash for all to reminisce together on Wednesday evening.