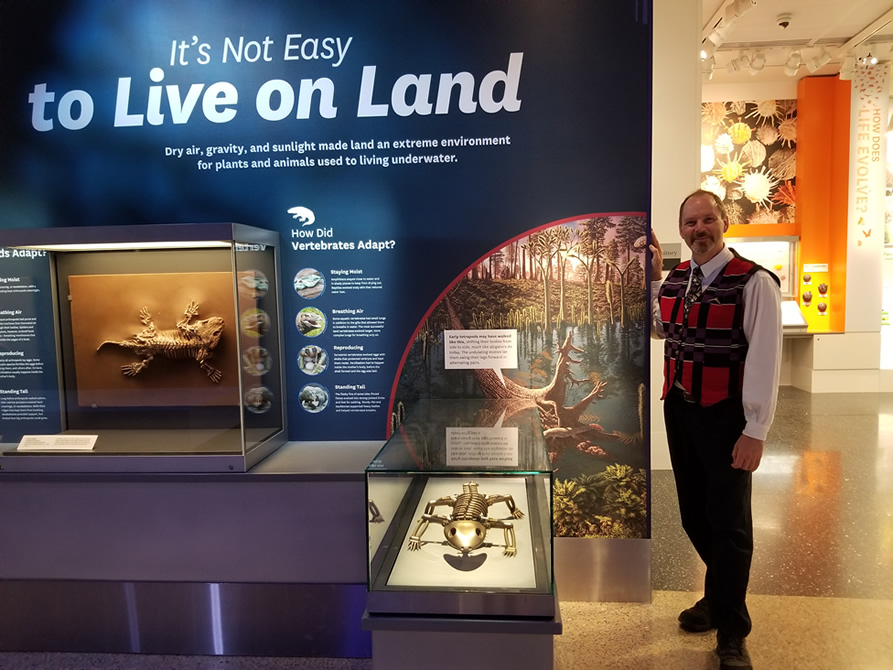 Walt Cressler, WCU paleobotanist and science librarian, was invited to the Smithsonian National Museum of Natural History in Washington, D.C., for a pre-opening gala for the renovated David H. Koch Hall of Fossils -- Deep Time exhibit.

“I was invited,” says Cressler, “because there is a small mural that depicts my research on early terrestrial ecosystems. I published the papers over the last couple of decades while here at West Chester University.” His research involves the evolution and history of landscapes via paleobotanical and geological investigations in the rocks of the Late Devonian Period, a time when the earliest forests were spreading, seed plants evolved, and fish developed limbs and were entering new habitats.

The 31,000-square-foot exhibit’s 700 fossils chronicle 3.7 billion years of life on Earth, highlighting the connections among ecosystems, climate, geological forces and evolution. Cressler’s contribution is in the section titled “It’s not easy to live on land” and he calls it thrilling “to have contributed the research shown in a corner of the hall depicting an important event in the history of life on Earth. The speakers at the gala kept saying that the Smithsonian’s Hall of Fossils is the single most visited room in the single most visited museum in the world.”

Closed for the past five years, the Hall of Fossils reopened to the public June 8.