West Chester audiences can hear a world-class saxophonist for FREE when West Chester University’s Criterions Jazz Ensemble is joined by saxophonist, Steve Wilson, for a concert on Friday, May 3, at 7:30 p.m. The concert takes place in the Madeleine Wing Adler Theatre, Swope Music Building and Performing Arts Center, 817 S. High Street, West Chester. The concert is FREE and open to the public. 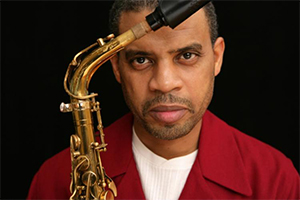 Steve Wilson has attained ubiquitous status in the studio and on the stage with the greatest names in jazz, as well as critical acclaim as a bandleader in his own right. A musician's musician, Wilson has brought his distinctive sound to more than 150 recordings led by such celebrated and wide-ranging artists as Chick Corea, Dianne Reeves, and many others. He has eight recordings as a leader. Wilson was the subject of a New York Times profile "A Sideman's Life", highlighting his work with the best in the industry. In 1996 he joined the acclaimed Dave Holland Quintet, and from 1998-2001 he was a member of Chick Corea's Grammy winning sextet "Origin". Since the 1990's Wilson has been regularly cited in the Downbeat Magazine Critics and Readers' Polls in the soprano and alto saxophone categories. The Jazz Journalists Association as Best Alto Sax Player nominated him in 2008, and for Best Soprano Sax Player in 2010. An in-demand and passionate educator, Wilson is an Associate Professor at City College of New York, and on faculty at the Juilliard School.

Wilson will work alongside the 22 Criterions ensemble members, who will perform a variety of classic, big-band, and traditional and contemporary jazz songs made famous by Thad Jones, Pate Metheny, Horace Silver, and others.

In addition, Wilson will perform with WCU professor of saxophone, Jonathan Ragonese, on a rendition of Bye Bye Blackbird, arranged by Ragonese.

The Criterions is the longest running University jazz band in the country. Originating in the 1920s, they were a student-led ballroom dance band, and provided entertainment for University dances, proms and post-Friday night games. As times changed, the “Crites” became a Faculty-led Jazz Ensemble by the early 1980’s, when the School of Music began Jazz curricula. They are known for their mastery of American popular songs and jazz standards from the early 20th century.