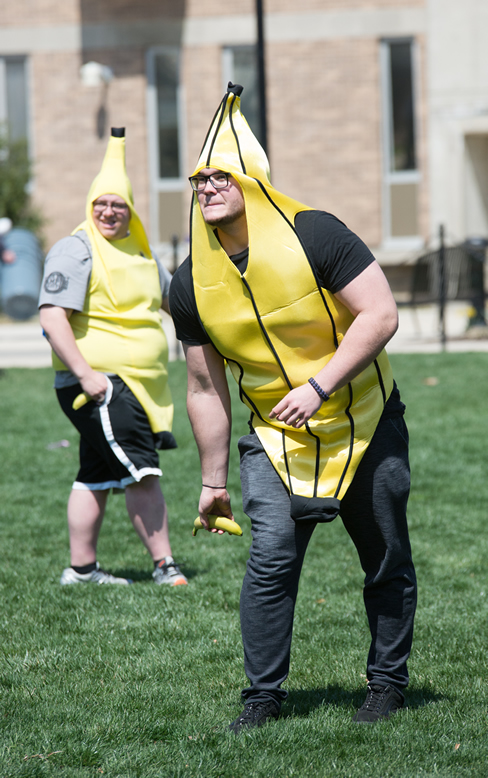 WCU’s annual Banana Day will take place Wednesday, April 17, 11 a.m. – 3 p.m., all over campus, with lots of the banana fun happening at 12 p.m. as students move through the Academic Quad! Banana Day is a special student rite of spring at WCU, and features the doling out of 3,000+ free bananas at almost every corner of campus, peeling around corners in banana and gorilla costumes, and competing in a bunch of banana-themed games all over the University to win coveted limited-edition Banana Day t-shirts. The best banana action will be found on the Academic Quad, Residential Quad, and in Sykes Student Union Ballrooms. With WCU’s Steel Drum Ensemble playing, Aramark serving their signature banana smoothies, and the Chilly Banana food truck featuring vegan banana ice cream, it’s going to be absolutely bananas on campus. WCU’s campus is bounded by South High Street, Sharpless Street, South New Street, and West Rosedale Avenue (campus map: https://www.wcupa.edu/campusMap/).

A host of composting features will be incorporated into Banana Day this year, so thousands of leftover banana peels will not go to waste. In addition to the highly-anticipated Banana Toss (similar to the Egg Toss), Hot Banana (think Hot Potato), and other games, Composting Pong will have students throwing banana peels into buckets and winners will be those who are the first to fill their buckets. Two composting bins will be located at each Banana Day site and volunteers will be on-hand to discuss the value of composting.

It’s all about the t-shirt… The Banana Day t-shirt is a secret design-in-the making every year and is only revealed on Banana Day. As a limited edition with only a quantity of 1,600, the specially-designed t-shirts are coveted and given solely to winners of banana games — until they last.

A great stress-reducer for students prior to exams, Banana Day was founded in 1996 by WCU alumnus Rodolfo “Rudy” Tellez, who organized the distribution of thousands of bananas across campus as a way to celebrate WCU spirit.

Following Banana Day, at 4:30 p.m. on the Academic Quad, local audiences are invited to join in the fun when ensembles from the Wells School of Music perform an open-air concert. The concert is a festive and FREE public event that includes raffles, frisbee give-aways, and popcorn. Audiences are invited to bring their own blankets and a picnic dinner.