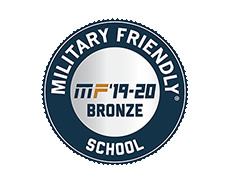 West Chester University has once again earned the Military Friendly Schools Designation from VIQTORY (previously Victory Media), which has been evaluating schools for this ranking for 10 years.

This year, WCU also achieved Bronze status, recognizing the University's coordinated system of service and support for veterans, active military, and those whose support them. The Greg and Sandra Weisenstein Veterans Center is the hub of activities and services for WCU's student veterans.

The 766 institutions that earned the 2019-2020 Military Friendly School designation were evaluated using both public data sources and responses from a proprietary survey completed by each school. They were assessed on their ability to meet benchmarks for veteran enrollment including retention rate, graduation rate, job placement rate, loan default rate, and transfer rate.

WCU already ranks at #38 on the US News 2019 Best Colleges for Veterans list and has received the Top Colleges and Universities designation from Military Advanced Education & Transition from 2014 through the present. In addition, WCU has been named one of the top 100 best schools for veterans in the first-ever rankings from the organization The College Consensus.

WCU is also a Yellow Ribbon Program participant (with the U.S. Department of Veterans Affairs).

The 2019-2020 Military Friendly® Schools list will be published in the May issue of G.I. Jobs magazine. The list can also be found at www.militaryfriendly.com.