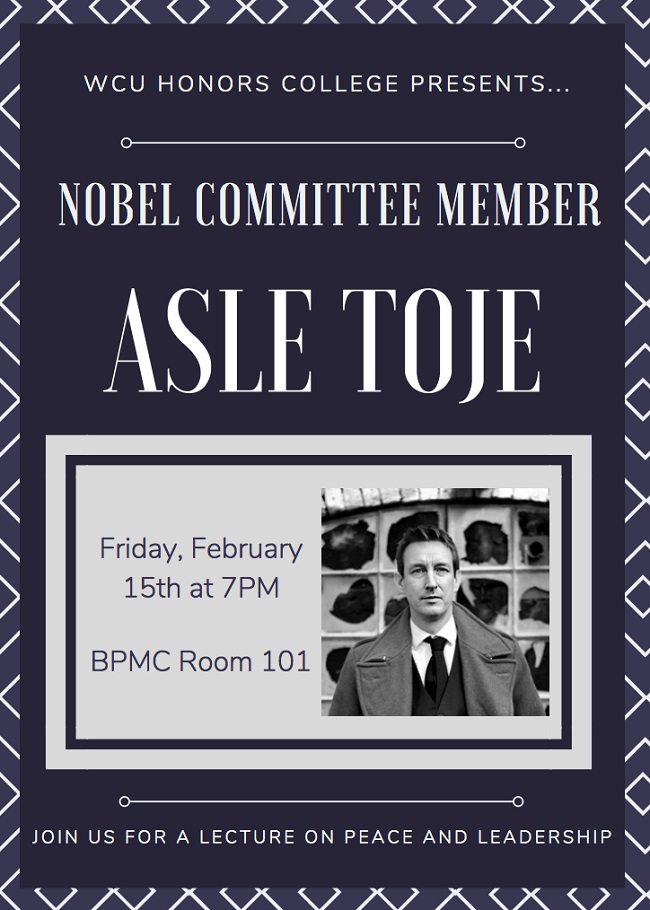 Lecture is Open to the Public Free of Charge

Member of the Norwegian Nobel Committee Asle Toje will discuss peace, leadership, and how the right Nobel Peace Prize Laureate is found on Friday, February 15, at 7 p.m. on West Chester University’s campus in the Business and Public Management Center (Room 101), 50 Sharpless Street, West Chester, PA. The lecture is open to the public free of charge, and is being sponsored jointly by the Office of the President and West Chester University’s Honors College.

Composed of five members who are appointed by the Norwegian Parliament, the Norwegian Nobel Committee is responsible for selecting all Nobel Prize Laureates, as defined by the final will and testament of Alfred Nobel, a Swedish chemist. The Norwegian Nobel Committee has awarded Nobel Prizes since 1901. Most of Alfred Nobel’s fortune has gone to a series of prizes in physics, chemistry, physiology or medicine, literature, and peace. In 1968, Sveriges Riksbank (Sweden’s central bank) established The Sveriges Riksbank Prize in Economic Sciences in Memory of Alfred Nobel.

Former Research Director at the Norwegian Nobel Institute in Oslo, Asle Toje is the youngest member of the Norwegian Nobel Committee. Toje, a foreign policy scholar and commentator, is a regular contributor to the Norwegian foreign policy debate, and a columnist in the Klassekampen and Erlik Oslo News. Prior to earning his Ph.D. at Pembroke College in Cambridge in 2006, Toje was a Fulbright Fellow at Columbia University from 2004-2005. He became a visiting scholar at the European Union Institute for Security Studies in Paris in 2008. In the context of Norwegian foreign policy, Toje advocates limited government, a free market economy, and social conservatism.