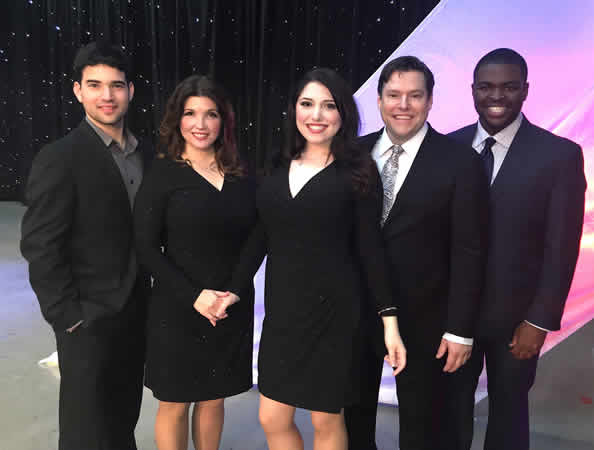 WCU Live! At West Chester University presents MARRIED TO BROADWAY on Friday, February 15, at 7:30 p.m. in the Emilie K. Asplundh Concert Hall, Philips Memorial Building. Tickets range from $15 - $27 and can be purchased at www.wcupatix.com or by calling 610.436.2266.

Perfect for Valentine’s Day, MARRIED TO BROADWAY features Ron Sharpe and Barbra Russell, who first met when they were playing the young romantic leads of Marius and Cosette in Les Misérables on Broadway in the early 1990s. Now married, the duo, as well as some of their equally talented leading actors and actresses, share stories of their own love affair, as well as the one they have with the music of the Great White Way.

“The story we often tell,” says Ron Sharpe. “Is that after being married on stage hundreds of times, we decided to do it for real.”

MARRIED TO BROADWAY “Has something for everyone,” says Sharpe. “We perform a variety of music, tell stories and jokes. It’s fun.”

About 40 songs are featured including songs from Phantom of the Opera, Les Misérables, West Side Story, Guys & Dolls, and others. They also perform a Disney medley and some other music out of the Rock ‘n Roll cannon including Bohemian Rhapsody, Natural Woman, Sweet Caroline and others.

RON SHARPE was the first actor to have played both male leads of Marius and Jean Valjean in Les Misérable  on Broadway. Other Broadway credits include original productions of The Scarlet Pimpernel, The Civil War, and in Sir Tim Rice and Alan Menken’s Disney's King David. One of his favorite roles was as Fred Barret in Titanic.

Ron's television credits include several appearances on The Rosie O'Donnell Show, The Tony Awards, and at the NBA All Star Game in Madison Square Garden. Ron reprised his role of Jean Valjean in the 25th anniversary production of Les Misérables, and was featured in the new production of Sweeney Todd at Lincoln Center.

BARBRA RUSSELL performed as the lead role of Cosette in the National tour of Les Misérables. Other shows include Luisa in The Fantastiks, and Laurie in Oklahoma, among others. She has performed across the country from Chicago, Florida, New Jersey, New York, and overseas from Singapore to Ireland. Worldwide and US concerts include a performance for the President and Prime Minister of Singapore, and performances at the National Concert Hall in Dublin, Ireland. Barbra can be heard on many TV and radio commercials as a voice over artist. She had the pleasure to perform with Tony Bennett at the U.S. Open.