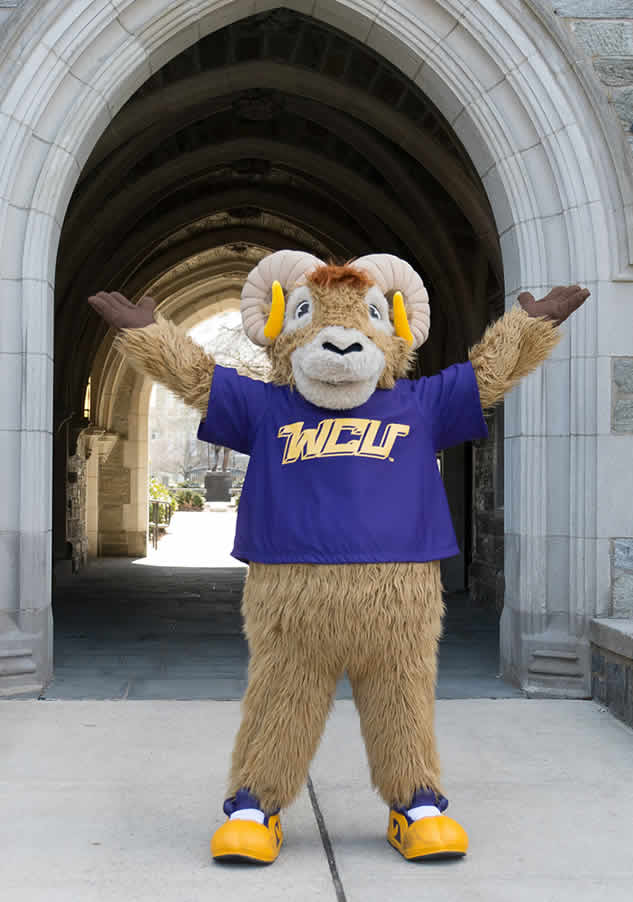 A bounce house, balloon artist, party favors, face painting, birthday cake, and much more… With all the makings of a fun-filled birthday party, WCU’s beloved mascot “Rammy” will “hoop-it-up” with his mascot friends during the men’s & women’s basketball games this Saturday, February 9, 2 – 4 p.m., Hollinger Field House.  Among Rammy’s mascot friends in attendance will be “Hawk” from Saint Joe’s University, “Soul Man” from the Philadelphia Soul, “D-Dog” from Downingtown West High School, and others! Fans will even be able to secure the mascots’ autographs, as well as autographs of the members of the basketball teams. WCU’s men’s and women’s basketball teams will each play against Kutztown University. General admission is $8, and tickets are free for children.

Rammy is one of WCU’s most popular Golden Rams. Taking the job as mascot from the University’s goat in 1946, Rammy has been an iconic symbol of WCU spirit and pride for over 70 years. The mascot represents tradition for thousands of alumni and WCU students today.

In October of 2017, Rammy received an updated look, which was student-inspired. WCU students were asked for their thoughts about updating the beloved mascot’s looks in a way that would best express WCU’s spirit. Voices were heard and a new iteration was developed as part of a campus-wide spirit campaign.

Rammy’s story is one that reflects the overwhelming pride that WCU students feel when they finally become Golden Rams.

From the time he was a lamb, it was obvious that Rammy was different.  Wandering the fields of West Chester, Pennsylvania, Rammy’s curiosity almost always took him to interesting places and made him stand out from his herd.  One day, Rammy noticed a castle building in the distance – Rams have excellent eye-sight after all.  Although it appeared that the castle had been there for many generations, no one from Rammy’s herd knew anything about it.  That’s when Rammy realized that it was up to him to be a leader; that there was more out in the world for him to explore, to learn, to achieve. He set out for the castle that very day.

He traveled over hills and dales and crossed many treacherous streams. It wasn’t an easy path, but eventually he arrived at the grand castle.

As Rammy walked through the castle’s arch, his eyes grew wide. Standing before him were rams with horns as bright as the sun.  Rammy approached one of the rams and marveled, “I’ve never seen a ram like you before.” The ram replied, “That’s because we’re Golden Rams. We are courageous, determined, kind, and we welcome all rams.”  Rammy assured him, “I can be all of those things.” “Come and join us,” the Golden Ram replied, “but you’ll have to prove yourself.”

Rammy joined the herd and learned to exemplify the qualities of a Golden Ram.  Rammy learned leadership, perseverance, ways to sharpen his mind, and how to celebrate all differences from his new herd. They learned plenty from him, too.

Rammy started traveling far and wide to share his knowledge, and to lend a helpful hoof to others.  Soon, Golden Rams weren’t just living in West Chester, they could be found across the state, the country, and the globe.

Years later, Rammy was walking past the castle when he stopped suddenly in his tracks.  His reflection in a window caught his eye.  He was much different than he remembered.  He had confidence, ambition, wisdom, and above all, his horns were gold.  He was a Golden Ram.