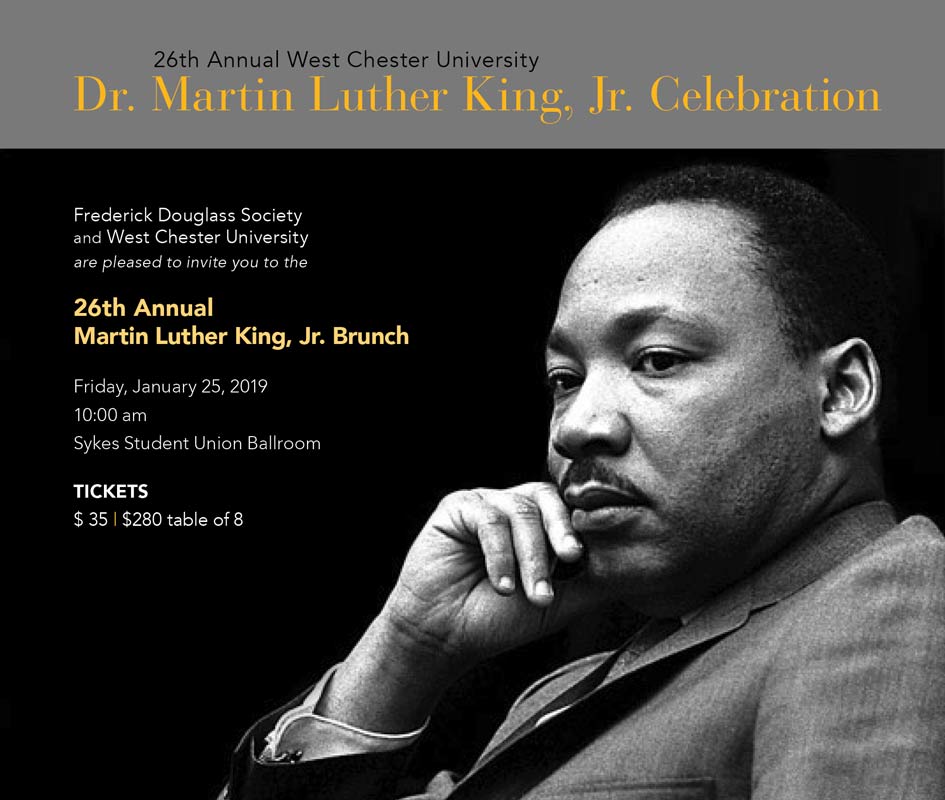 Martin Luther King, Jr., Day is officially celebrated on Monday, Jan. 21, but the University will hold its annual celebration on Friday, Jan. 25, after students, faculty, and staff have returned to campus for the spring semester.

The day begins at 10 a.m. with the 26th annual Dr. Martin Luther King, Jr., Brunch (sold out), a scholarship fund-raising event hosted by the University and the Frederick Douglass Society, in Sykes Student Union Ballrooms. The event celebrates Dr. King’s life and legacy through images, spoken word, performances, and music with the WCU Gospel Choir, and honors WCU alumni whose professional lives and vocational activities have reflected Dr. King’s ideals. This year, the Drum Major for Justice honoree is Darren Lipscomb ’08, M’11, Director of Outreach, Recruitment, and Enrollment Services at Delaware County Community College (bio below).

The activity continues at 7 p.m. with a free presentation of The Hate You Give. Based on the New York Times best-selling novel by Angie Thomas, this film captures the journey of a young African American woman after she witnesses her best friend being killed by police. Stars are Amandla Stenberg, Russell Hornsby, Regina Hall, Common, Anthony Mackie, and Issa Rae. The film will be shown in Sykes Theater.

Additionally, on Thursday, Jan. 31, the University’s Office of Service Learning and Volunteer Programs is coordinating a service project to make no-sew blankets for children at Nemours A.I. DuPont Children’s Hospital, patients at Chester County Hospital, and “Fleece for Keeps” for children in foster care. Two sessions are scheduled: 12:30 to 2 p.m. and 2:30 to 4 p.m. in Sykes Student Union Ballroom. Members of the University community can register here. 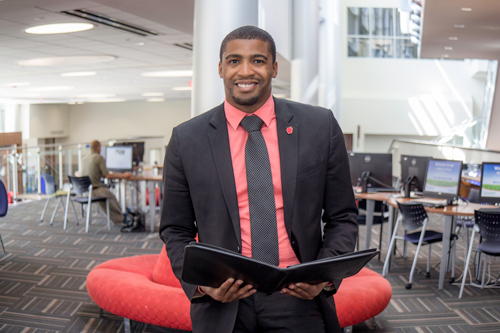 Darren Lipscomb is Director of the Admissions Office at Delaware County Community College. His record of service to the Philadelphia region and beyond encompasses academic, professional, community, and military endeavors.

He earned his doctorate in higher education leadership in 2018 from Widener University and both his master’s (counselor education) and his bachelor’s (marketing) degrees from WCU. He is enrolled at Temple University’s Beasley School of Law in pursuit of his J.D.

In his undergraduate career at West Chester, Lipscomb was president of the Black Men United student organization for nearly two and a half years and served on the Multicultural Recruitment Team and Student Activities Council. He was named Citizen Leader of the Year in his senior year. While completing his master’s degree, Lipscomb began serving as an officer for the Philadelphia Alumni Chapter of Kappa Alpha Psi, which he had joined as an undergrad. In his advisory roles, he mentored undergraduate members from WCU and other regional universities.

From January 2011 through June 2018, he was a volunteer and leader with the Philadelphia chapter of the renowned mentorship organization Minds Matter. In addition to mentoring accomplished high school students from low income families, Lipscomb took on increasing responsibility, becoming director of financial aid and VP for community engagement. His last role with Minds Matter was as the organization’s senior vice president for programming.

Recently, Lipscomb was also appointed to chair the Mayor’s Commission on African American Males for the City of Philadelphia.

Since March 2015, he has served as the vice president and youngest board member of the Overbrook Park Civic Association.

Lipscomb is also a veteran, having served from 2003 to 2010 as an Intelligence Analyst in the Pennsylvania Army National Guard. He supported Hurricane Katrina relief efforts in Louisiana in 2005 and was deployed to Iraq in 2009.