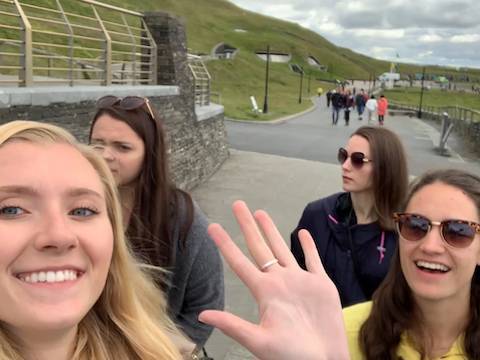 The Irish Media Experience offers students a unique opportunity to gain first-hand exposure to the culture and media systems in one of the most dynamic environments in Europe: The Republic of Ireland. Through a combination of learning modalities students will learn about the Easter Rising in 1916 and other significant events that have significantly impacted Irish newspapers, films, music, broadcast stations and internet operations. The course allows you to experience these media by meeting and talking with major media figures.. These include newspaper reporters and editors, radio hosts, as well as people in the public relations, advertising, and filmmaking industries. We won’t simply invite them to our classroom – we will go to where they work to talk with them about their jobs and consider the role and evolution of media in the nation.

The other goal of the course is to introduce students to Ireland itself – the castles, pubs, prisons, rivers, bridges and government strongholds that make the country what it is today. In our eighteen days in Ireland, students will get to know the Irish culture, landmarks, history and, above all, people who make this such a vibrant part of the European Union.

This program will take place in two different sections of the Republic of Ireland. We will begin on the west coast, first in the charming city of Limerick and then on to the “musical capital” of the island - Galway. After a week on the west coast, we’ll  take a train to Dublin, where we’ll spend a week in the nation’s largest and most important city.

The course runs in the first summer session of 2020. In the first week of the course classes will meet on the WCU campus, as students get to know each other and learn about Ireland. We will then fly to Ireland and tour the country!

Participants will earn credit for HON 320 (3 credit hours) for participation in this program. The HON 320 course counts as an interdisciplinary course as well as an upper-level course for COM and MDC majors. For students who are not majoring in Communication Studies or are members of the university’s honors college, the course will count as a general elective. (In the past, we have included students from a variety of majors, including communication, media studies, journalism, marketing, business, English literature, writing, history, psychology and sociology. The program is open to all undergraduate students from any year.

In the west: RTE (the national classical music radio station); the Cliffs of Moher; TG4 (Ireland’s all-Gaelic television network); the Limerick Leader (region’s largest newspaper) and the Frank McCourt Museum, where we learn about the author of the award-winning novel, Angela’s Ashes.   In the east: General Post Office and Kilmainham Gaol tour: Visit the site of the 1916 Irish uprising and then experience the jail where many of the leaders of the Irish rebellion were held and ultimately executed, as well as The Irish Times and the Abbey Theater, the national theater of Ireland In visiting both sites we will learn about key moments in Irish history. Other tours will include the Guinness Storehouse and the Irish Writer’s Museum.