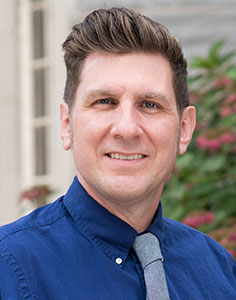 On sabbatical for Spring 2023
*Meetings through personal Zoom meeting room
Email to set up a meeting!

Dr. Boyle's (he/him/his) research focuses on how news media present issues to the public, how and why people use media, and the implications of news coverage and media use patterns on subsequent outcomes such as information seeking, public opinion, and perceptions of media effects, falling into two major areas. The first area of his research specifically addresses news treatment of protest groups and how such treatment affects participation in the political process. The second area of his research explores the processes underlying the third-person perception - a common pattern where people typically perceive others to be more affected by media than they are - and the resulting third-person effect, often characterized by support for censorship and other regulatory responses.

His primary teaching areas include Research Methods (MDC255), Media & Culture Theory (MDC254), and Mass Media & Protest (MDC420). Dr. Boyle was instrumental in developing the Media & Culture (MDC) major and minor programs, which are part of the Communication and Media Department. The minor began in Fall 2017 and the major launched in Fall 2018.

At Fall 2011 commencement, Dr. Boyle received the E. Riley Holman Memorial Faculty Award given to a WCU faculty member who uses innovative teaching techniques that foster student creativity. Dr. Boyle was previously the Television Station Faculty Coordinator for Verizon Channel 33: WCCTV (West Chester Community Television). He helped to found the station, which represents a partnership between WCU and West Chester Borough and provides an excellent opportunity for students interested in television and video production to reach a larger audience. The station hit the airwaves in May of 2012.

Oeldorf-Hirsch, A., Schmierbach, M., Boyle, M.P., & Appelman, A. (Forthcoming). The influence of fact-checking is disputed!: The role of party identification in processing and sharing fact-checked social media posts. Accepted for publication in American Behavioral Scientist.