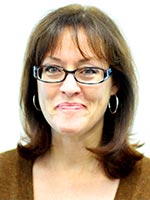 It is truly amazing to reflect on the transformation that the SOM has undergone over the past few years. The dedication and quality of our faculty and the enthusiasm and talent of our students are now complemented by a beautiful new performing arts building and our recent designation as an All-Steinway School. Our students benefit from the rich cultural traditions of the Chester County area, as well as access to world-class arts performances in nearby Philadelphia.

All musicians face the dual challenge of mastering the technical requirements of an instrument as well as developing the art of expressive musical performance, ultimately finding their own musical voice. I strive to help students reach these goals, so that when they reach the end of their tenure at WCU, they are ready to go out into the world as independent, creative musicians and educators who can make a positive contribution to society.

Heralded by the Philadelphia Inquirer as "on the cosmic cusp where Mozart might mingle with Mingus", pianist Terry Klinefelter has performed in a wide variety of settings in both the classical and jazz fields. Appearances include the Philadelphia Orchestra Chamber Music Series, Philadelphia Fringe Festival, Endless Mountain Music Festival, Chadds Ford Winery Jazz Festival, Jazz at the Springs and the Arcady Festival in Bar Harbor, Maine. Dr. Klinefelter has been pianist for the Pennsylvania Ballet, and a soloist with the Harrisburg Symphony Orchestra (where she has also served as keyboardist for many years), the Allegro Society, Bux-mont Chamber Orchestra, and recently with the WCU Symphony Orchestra at the Kimmel Center. She has performed in Mexico, Italy (Rome Festival Orchestra), and collaborated with such diverse artists as renowned early music soprano Julianne Baird (tours with The Jane Austen Songbook), violist Emanuel Vardi, Philadelphia Orchestra violinist Kim Fisher and jazz pianist George Shearing (opening of Bally's Grand, Atlantic City). Past awards include the PMTA Collegiate Artist Award as well as prizes in the Wilmington JCC Young Musicians Contest and a recent teaching grant from the Main Line Music Teachers Association. As a jazz musician, Dr. Klinefelter also performs regularly in the area with many of Philadelphia's finest musicians, and has appeared on several recent recordings (Anne Sciolla's Diva-Free Zone and Paul Klinefelter's Night Mood). Her debut jazz trio CD, Simple Gifts, was praised for its "impressive sonority". Dr. Klinefelter was recently invited to create jazz settings for several poems by renowned poet Dana Gioia for WCU's Poetry Salon this fall, in collaboration with soprano Anne Sciolla.

Dr. Klinefelter began teaching at WCU in 1996, and became a permanent faculty member in 2001. Her principal teacher was Benjamin Whitten; she has also worked with Ena Bronstein, Marilyn Neeley, Harvey Wedeen and Lambert Orkis, and recently studied Taubman technique with Robert Durso. She is a member of Pi Kappa Lambda, a national music honor society, and an active member of the Music Teachers National Association. A longtime yoga practitioner, Dr. Klinefelter recently became a Registered Yoga Teacher and has enjoyed helping her students to experience reduced performance anxiety with this ancient practice. Dr. Klinefelter's students have included winners of the WCU Concerto Competition as well as the Jacobs Steinway Award and other scholarships. Many of her students have gone on to pursue careers as performers and educators. As a teacher in WCU's Community Music School, Dr. Klinefelter's students have included prizewinners in the Keystone Competition as well as several winners of the "Best Soloist" award in area jazz festivals.