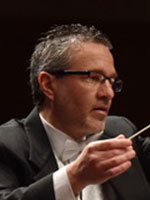 Joseph Caminiti is Director of Orchestral Studies at West Chester University. He is committed to connecting with audiences through dynamic and thoughtful concerts. Experiencing music as a unique inspiration in life, he works to relate it to the increasingly diverse audiences of our day. His conversational and visually distinctive "Concerts in The Round" have grown audiences who participate by dialoguing with the performers. The smartphone-friendly features, in-concert conversations, multi-media elements, and pre-concert "round-tables" have all captured the interests of audiences. His "Concert on the Quad" annual series at West Chester University has included audience-selected film scores, Latin and American music, and collaborations with steel drum bands, Latin ensembles, and the Dalí Quartet. These concerts have received the attention of CBS News who spontaneously ran a spot on it.

Joseph is continually seeking musical partnerships with arts and charitable organizations. In 2012 he organized and conducted two concerts with Advocates For the Homeless and Those in Need, Esperanza, and other organizations to help raise funds for underserved communities. In 2016, he combined with UrbanPromise International to help raise funds for a new school in Malawi, Africa. He now also serves on the Board of the Delaware County Red Cross. In 2017, he invited ARTolerance to West Chester University to present a masterclass and concert on the power of art to promote tolerance and co-existence in a challenging world. He presented benefit concerts for West Chester University's Promise Program (aid for the homeless) and their Resource Pantry in 2019, and in 2021 and 2022, collaborated with the American Red Cross and Musicopia. Also in 2022, he aided in planning a University panel to discuss the Russian war on Ukraine and followed it with two orchestral selections that helped listeners process the tragedies.

At West Chester University, Joseph conducts the Symphony, Chamber and Opera Orchestras, and the his newly founded professional Gateway Ensemble. Among his teaching responsibilities are the undergraduate and graduate conducting courses, and he is Director of the Graduate Orchestral Conducting program.

As a horn player, Joseph is Principal Horn of the Riverside Symphonia (Lambertville, New Jersey), member of the Fairmount Chamber Ensemble (Philadelphia), and is a chamber recitalist with other professional ensembles throughout the Philadelphia region. He resides in Pennsylvania, with his wife, Kirsten. They are active birders and savor hearty conversations over coffee.