Legacy of Famed Abolitionist Frederick Douglass Will Live on at WCU Thanks to Dr. Clifford E. DeBaptiste 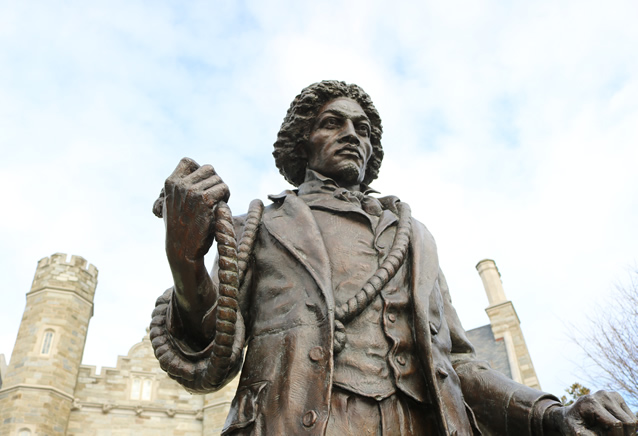 In a fitting tribute to the great abolitionist, orator, and statesman, the first lecture will be held on the University’s Academic Quad alongside the majestic statue of Frederick Douglass, which stands in commemoration of the abolitionist’s last public lecture on WCU’s campus and was erected in 2003 by the Pennsylvania Historical and Museum Commission. The lecture, which is open to the public free of charge, is hosted by the Frederick Douglass Institute and is made possible through the generous gift of DeBaptiste, the first African-American mayor of West Chester Borough and a recognized champion of education.

As part of the inaugural effort, DeBaptiste will be honored for his vast contributions to the Chester County community by President of the Citizen Recognition Project Jeffery Brown, who will also present the Walk of Fame plaque to the former mayor. Among the event’s highlights will be an address by West Chester University President Christopher Fiorentino, and the sharing of the Institute’s history by Director of the Frederick Douglass Institute Christian Awuyah.

“Our students and those who live in the community are fortunate to be aligned with an individual who is deeply committed to advancing humanity and initiating rich conversations about the legacy of a man whose life merits much reflection,” said Fiorentino. “Thanks to Dr. DeBaptiste’s generosity, all of us can become well-rounded citizen scholars by studying Douglass’ example, examining issues of social justice, and improving the present by learning from the past. We are equally proud that West Chester University’s Frederick Douglass Institute will be taking the lead in coordinating these particularly relevant lectures for many years to come.”

About the Frederick Douglass Institute at West Chester University

The mission of the Frederick Douglass Institute at West Chester University of Pennsylvania (FDI) is to maintain the legacy of Frederick Douglass before the campus community, local community, region, and the nation through the highest quality of academic programming that promotes excellence in scholarship, teaching, and institutional advancement. Consistent with its mission, and with the mission, vision, and values of the University, the Institute is an educational and cultural resource for advancing multicultural studies across the curriculum and for deepening the intellectual heritage of Frederick Douglass, the former slave, distinguished orator, journalist, author, and statesman.

Douglass, who was a frequent visitor to the West Chester area, gave his last public lecture on West Chester’s campus on February 1, 1895, just nineteen days before his death. Guided by the spirit of Douglass and his legacy, the Institute aims to create opportunities to build a better community for all of us to fulfill our destiny as human beings.