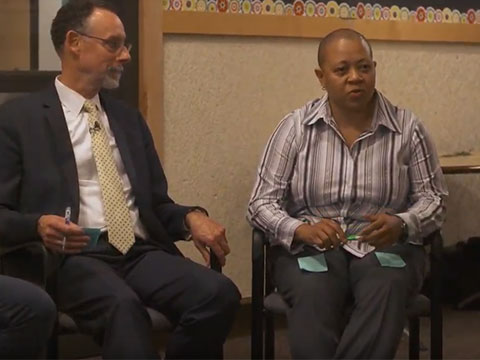 Recently, I spent a day on the job with Tammy Hilliard-Thompson, who is interim director of WCU's Lawrence A. Dowdy Multicultural Center. Although I knew the center was well-utilized, I was surprised to see just how busy it can get. Designed to promote the academic achievement and personal development of more than 3,700 African-American, Latino/a, Asian-American, and Native American students, the center is a home base for coordination of services as well as a gathering place where students socialize and connect. The day I worked there, every desk, seat, and ottoman was taken.

So, initially, it comes as a surprise to hear Hilliard-Thompson say that she thinks about her son, Brandon, frequently during the workday. But she isn't daydreaming or letting her personal life intrude on her job. Rather, she uses her perspective as a parent to stay focused on the needs of the students she serves.

"I love working with young people and helping them overcome the challenges they're facing," says Hilliard-Thompson. "But my days are hectic. Many students come to me for support, yet, at the same time, I have other tasks on my plate. So, I ask myself: 'How would I want Brandon to be treated in this situation? This is someone else's child who needs me.'"

Larry Dowdy, center, is Tammy Hilliard-Thompson's long-time mentor and a frequent visitor to the Multicultural Center that he generously supports.

If a student approaches Hilliard-Thompson as she's headed to a meeting, she asks: "Can you make an appointment to meet me later? But, I understand if you need to talk right away."

Depending on the response, Hilliard-Thompson may ask the student to walk across campus with her en route to where she needs to be; other times, she misses the meeting. "Once, I sat down with a student who was in tears and wouldn't tell me what the problem was. She finally opened up and told me that she was hungry," says Hilliard-Thompson. "I helped her connect with the Resource Pantry and other sources of support on campus."

During my day on the job with Hilliard-Thompson, I attended a meeting of the Multicultural Organizational Advisory Board, sat in on a staff meeting, and talked with a lively group of students who participate in the center's mentoring program. While I witnessed what Hilliard-Thompson does on a daily basis, I suspect my presence – as well as that of a photographer and film crew – kept students at arm's length.

Spending the day with Hilliard-Thompson wasn't enough. I went back and revisited the Multicultural Center alone and talked to her, to center staffers, and especially, to the students who count on her. It was through these interviews that I learned what makes her such an asset to West Chester University.

It was Hilliard-Thompson's first job in higher education – in 1995, at a small university in Colorado – that shaped the way she has looked at people and challenging situations ever since. Hilliard-Thompson was a newly minted college graduate when she accepted a job as a resident director. Her first day on the job she was told one of her resident assistants was racist.

"My first thought was 'well, then what is this person doing working here?'" recalls Hilliard-Thompson. She and the staffer couldn't have appeared more different – an African-American young woman from metropolitan northern New Jersey and a Caucasian young man from rural Colorado garbed in Wrangler jeans, boots and a cowboy hat.

Hilliard-Thompson pushed aside the rumors she had heard, and her own preconceived notions, and set to work getting to know this young man.

"It wasn't easy for him or me," recalls Hilliard-Thompson. "But, little by little, we began to respect each other, and realize what we had in common, such as the fact that we were both first-generation college students and had parents who were farmers.

"I can't tell you if this student was, in fact, racist," she says, "but the experience helped me look at each new person I encounter as an individual, rather than as a stereotype."

After several more years in Colorado, homesickness drew Hilliard-Thompson and her husband, WCU alumnus Kenneth Thompson, back East. She worked as a graduate hall director at Sacred Heart University in Fairfield, Ct., then, in 2000, saw an ad for a position at WCU and jumped at the chance.

"West Chester has a great reputation, and coming here put me closer to my parents and extended family in New Jersey" she says.

Her first job at WCU was resident director at McCarthy Hall, now the site of the Business and Public Management Center, and her first supervisor was Marion McKinney, now director of Residence Life.

"Tammy is remarkable," says McKinney. "From the moment I met her, she has always given 200 percent. I always tell Tammy that she has the Midas touch — everything she touches turns to gold and it is better because of her."

Hilliard-Thompson and her family spent eight years living on campus, first in McCarthy and then Schmidt Hall. Brandon was just three when they arrived.

"When you live where you work, you're never really off duty," says Hilliard-Thompson. "I'd be sitting down to dinner and then, invariably, something or someone needed my attention. There were many nights when Kenneth and Brandon would eat without me."

On the upside, she says campus was a great place for Brandon to spend his growing up years. He loved all the activities and would tag along to evening events. The family lived on campus until 2008, when she took a job with the Multicultural Center as associate director. (It's no surprise to hear that Brandon became a Golden Ram. He's now a junior psychology major.)

In 2010, Hilliard-Thompson left for a position at Cheyney University and later, the nonprofit Philadelphia Futures. But she missed WCU and came back when she took a position in the Office of Student Conduct in 2016. 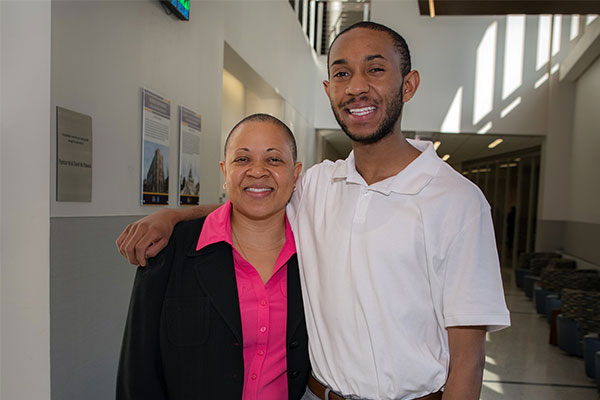 Tammy Hilliard-Thompson, and
her son, Brandon Thompson, a WCU junior.

Her current role, as interim director, ends Jan. 31. Much as she loves working with the students at the center, she'll be returning to the Office of Student Conduct, where she won't be called upon to work evenings and weekends.

Hilliard-Thompson has an autoimmune disorder that is exacerbated by stress and long hours. While we talked, she ruefully glanced down at her hands, which were puffy and swollen. "I think my body is telling me I need to slow down," she says.

Hilliard-Thompson says she loves the challenges of getting students back on track and that her role in the Office of Student Conduct represents a different way she can contribute to student success. And while she will be heeding her doctor's advice and working more regular hours, you can guarantee she'll be giving it her 200 percent when she's on campus, just like she always has.