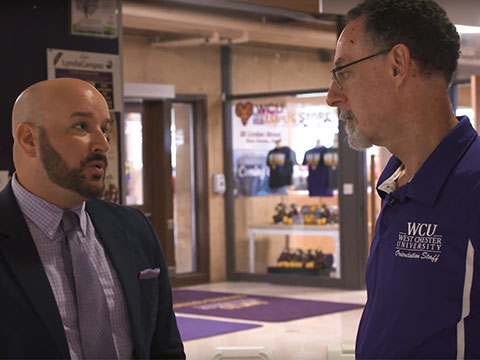 Jared Brown has 3,975 students to get ready for college. While he may not be the one buying these students twin XL sheets or taking them to the doctor for meningitis shots, the work he's doing to help students prepare is critically important.

Part 1of this process is what most other WCU employees notice – eight days in June when hundreds of new first-year students and their families arrive on campus, eager to learn more about the University. These sessions are followed by three days in mid-August designed just for transfer students and their families. From the perky, purple clad Orientation Leaders waving at every intersection to the striped tent on the Quad where families gather for refreshments, it would be hard not to notice Part 1 of New Student Orientation.

Yet Brown, supported by a team of seven staff and 39 student Orientation Leaders, is just as busy now, as the academic year launches. Part 2 of New Student Orientation runs from August 24 to 26 and is jam-packed with activities, including a Rams After Hours social and a Welcome Dinner at Lawrence Dining Hall hosted by my wife, Sue, and me.

I caught up with Brown for a day of job shadowing at one of the first orientation sessions in June. I was told to report at 8 a.m. but later learned that Brown let the "new guy" off easy – Orientation Leaders are expected to be on campus for a pre-event "huddle" at 6:30 a.m. before they head off to their morning work assignments. My first task was to greet and check in new students, then send them and their families off to a coffee and pastry station. My fellow Orientation Leaders – and Brown for that matter – must have already fueled up with coffee. They were animated and exuberant and worked to make each new Golden Ram feel special as they arrived.

Brown says that his high energy, spirited approach comes easy because he is passionate about his work and knows how meaningful orientation is to the success of every student.

"Research shows that when institutions focus time and attention on the beginning of a student's educational journey it results in positive outcomes in student retention and graduation," says Brown. "I've been at the University for 13 years and with New Student Programs since 2012. We're constantly refining and improving the programming we deliver; every aspect of this orientation is intentional."

Thus, it's no accident that parents and other family members split off from their students at an early morning welcome session and head to a separate family program. "Students need to learn how to navigate successfully on their own as they transition to college," notes Brown. "There's no better time to start than at orientation."

I was assigned to be an Orientation Leader to a group of 21 Exploratory Studies majors, alongside Orientation Leaders Jeff Camp, a senior psychology major, and Olivia Spring, a sophomore majoring in Women's and Gender Studies.

After an ice breaker activity, we set off on a campus tour. But, unlike Admissions tours, which by design, are general in nature, this tour focuses on the nitty-gritty – like where exactly the Bursar's Office is and what to do if you lose your Ram Card. Camp and Spring handed the reins over to me at the library, where I filled the students in on the essentials – like the fact that you can print up to 125 free color copies a week and borrow laptops from the library, too.

The program also included sessions with Residence Life and Off Campus and Commuter Services, college-specific meetings, and the all-important finding out your fall schedule. (Please, no 8 a.m. classes could be heard more than once.)

By day's end, some of the incoming students were looking a bit hot and tired. When they arrived at Sykes for a wrap-up event, the first thing to greet them was a complimentary water ice station. 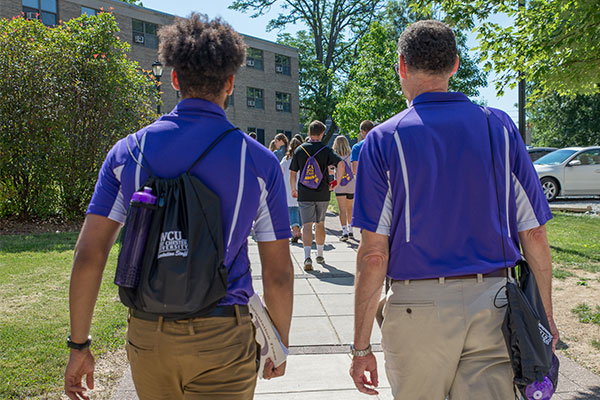 It's this kind of attention to detail that makes WCU's New Student Programs shine. "The show must go on" is Brown's perennial mantra. Over the years, he and his team have contended with power outages, heat waves, and one year, post-tornado landscape damage on campus.

"A small tornado had blown through campus the night before," recalls Brown. "While we didn't suffer any building damage, there were tree limbs and storm debris strewn about and Facilities employees were scrambling to clean things up. But, we put on our game day faces and greeted these new Golden Rams just as enthusiastically as we greeted the new Golden Rams the day before."